You are here: Home › Kalpana Chawla
Published on March 2, 2010 in Science and Technology
Pending cleanup , corrections 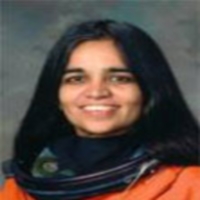 EXPERIENCE: In 1988, Kalpana Chawla started work at NASA Ames Research Center in the area of powered-lift computational fluid dynamics. Her research concentrated on simulation of complex air flows encountered around aircraft such as the Harrier in “ground-effect.” Following completion of this project she supported research in mapping of flow solvers to parallel computers, and testing of these solvers by carrying out powered lift computations. In 1993 Kalpana Chawla joined Overset Methods Inc., Los Altos, California, as Vice President and Research Scientist to form a team with other researchers specializing in simulation of moving multiple body problems. She was responsible for development and implementation of efficient techniques to perform aerodynamic optimization. Results of various projects that Kalpana Chawla participated in are documented in technical conference papers and journals.

NASA EXPERIENCE: Selected by NASA in December 1994, Kalpana Chawla reported to the Johnson Space Center in March 1995 as an astronaut candidate in the 15th Group of Astronauts. After completing a year of training and evaluation, she was assigned as crew representative to work technical issues for the Astronaut Office EVA/Robotics and Computer Branches. Her assignments included work on development of Robotic Situational Awareness Displays and testing space shuttle control software in the Shuttle Avionics Integration Laboratory.

In November, 1996, Kalpana Chawla was assigned as mission specialist and prime robotic arm operator on STS-87 (November 19 to December 5, 1997). STS-87 was the fourth U.S Microgravity Payload flight and focused on experiments designed to study how the weightless environment of space affects various physical processes, and on observations of the Sun’s outer atmospheric layers. Two members of the crew performed an EVA (spacewalk) which featured the manual capture of a Spartan satellite, in addition to testing EVA tools and procedures for future Space Station assembly. In completing her first mission, Kalpana Chawla traveled 6.5 million miles in 252 orbits of the Earth and logged 376 hours and 34 minutes in space. In January, 1998, Kalpana Chawla was assigned as crew representative for shuttle and station flight crew equipment. Subsequently, she was assigned as the lead for Astronaut Office’s Crew Systems and Habitability section. She is currently assigned to the crew of STS-107 scheduled for launch in 2003.