Shivpuri Omkareshwar Jyotirling (Hindi:ओम्कारेश्वर ज्योतिर्लिंग, Sanskrit:शिवपुरी म्करेश्वर् ज्योतिर्लिन्ग) is located at a distance of about 12 miles from Mortakka in Madhya Pradesh.

A special feature of the location of Omkareshwar Temple is that the river Narmada branches into two and forms an island Mandhata or Shivapuri in the center. The shape of the island resembles that of the visual representation of the Omkara sound, ॐ In Omkareshwar Mandir regular Pujan and Seva of deity is beings performed from centuries in the same ways. Timings of Pujan and Darshan may change during Festivals and special Occasions

The Schedule for Pujan and darshan is as follows:

Omkareswar is a Jyotirlinga of Lord Shiva located  on the banks of the Narmada, . It is  located at a distance of about 77 KM from Indore and 13 km from Mortakka in Madhya Pradesh. The river Narmada splits into two and forms an island named Mandhata or Shivapuri in the center. This island is about 4 KM long and 2 KM wide. The shape of the island resembles the visual representation of the letter Om.

The main Omkareswar temple is built in the North Indian style of architecture, with high spires. This temple is the main attraction of the pilgrims. As to who constructed the temple and when, is still unknown. The sanctum sanctorum containing the Jyotirlinga seems to have been originally a small temple of the old construction style, the dome being made of layers of stone slabs. As this temple is too close to the straight deep bank of the Narmada to the south, the great extension is of new construction style. This is the reason why the sanctum sanctorum and the main deity are neither in the front of the main door nor below the higher conspicuous Shikhar or the tower of later construction. Omkareshwar, Lord Mahakaleshwar, Sidhhanath, Gupteshwar and Dhwadhadhari   shikhar.

Omkareshwar temple in 1959 has been declared a public trust under the M.P Public Trusts Act 1951,

A scheme of management was introduced in 1967/U/S 27 of the M.P. Public Trust Act, with 7 trustees including the Rao of Mandhata (as managing trustee) and his nominee, two nominee of the Collector Khandwa , tree representatives each one of the Zilla pachayat Khandwa, Block panchayat Punasa and of the Nagar Panchayat Omkareshwar.The present managing trustee is Rao Devendra Singh of the Rao family.

The nearest airport is Indore (77KM), Connected by regular flights from all over India

Shiva Puran describes the greatness of Omkareshwar and Mammaleshwar. It says, two sons of the sun dynasty Mandhata – Ambarish and Mucchkund practiced severe penance and austerities here and pleased Lord Shiva. They also performed great religious sacrifices in this place because of which the mountain is named Mandhata.

Another popular legend says that once upon a time Vidhya Parvat practiced severe penance and worshipped Parthivarchana along with Lord Omkareshwar for nearly six months. As a result Lord Shiva was pleased and blessed him with the desire boon. On the sincere request of all the gods and the sages Lord Shiva made two parts of the lings. One half being Omkareshwara and the other Amaleshwara or Amareshwar.

Omkareshwar or better known as Mandhata Omkareshwar is one of the foremost of the 12 Joytirlingas or it is luminous physical self-presentation of Lord Shiva of the Hindus. Omkareshwar, the sacred island, shaped like the holiest of all Hindu symbols, ‘Om’, has drawn to it hundreds of generations of pilgrims.

Omkareswar kshetra parikrama is the very important thing to do in Omkareswar tour.The parikrama route Starts from Omkareswar temple and completes after surrounding the hill.Adi Shankaracharya did parikrama when he visited Omkareswar jyotirling.While doing parikrama, he met his Guru Sri Govindapada and learned Advaita from him.We can see that place at the end of parikrama.It is nearer to Omkareswar temple.

First of all we will reach Triveni sangamam.Here we can take holy bath.Just after Triveni sangamam there is a temple of Runa Mukteswar. In this temple people offer Red gram to lord Siva. After that the journey is through forest.It is very pleasent and nice to see in Winter season.After crossing this forest there is a temple of Bholenath.It is the mid point of parikrama. The Siva linga in this temple is very big and it is made of Narmada banam. After that we will reach Durga Goddess temple. By crossing Durga temple we will enter into a deep forest.In the forest there are many ancient monuments and temples which are under the control of Indian Archeological department.

In the way of Parikrama one can see so many Sadhus belonging to different traditions.If we are lucky we can see deers and peacocks in the route. The view of Narmada river is very beautiful with the bridges and the Project. The last stop is the cave of Guru Govindapada. Totally we can get very much pleasure by doing this parikrama.

Other Significant Temples near Omkareshwar Temple:

Other attractions to visit near Omkareshwar Jyotirling Temple:

Of the temples in the holy place of Omkareshwar, the 24 Avatars hold a special place. These are a group of Hindu and Jain temples, beautifully designed and built with unique styles of architecture.

The temples of the 24 Avatars in Omkareshwar are a remarkable site. This is because the architecture of each temple is different from the rest, and exclusive styles are used which makes the 24 avatars a major tourist attraction of Omkareshwar.

During the time of Mahmud of Ghazni in the 11th century, the Muslim invaders had destroyed many of the Hindu and Jain temples that stood in different parts of the country, including Omkareshwar. But still, there are a number of temples that’s still stand on Omkareshwar soil. Of these are the 24 avatars, a group of Jain and Hindu Temples. 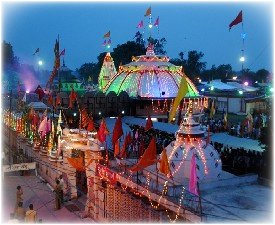 Sri Dada Darbar Khanwada is the original Mausoleum and shrine of Shri 1008 Bade  Dadaji Keshawananda ji Maharaj and Shri 1008 Chhote dadaji Hariharanand ji  Maharaj. Shri 1008 Bade Dadaji Maharaj took salvation on 3 Dec 1930 and Shri  1008 Chhote Dadaji Maharaj on 5 Fab 1942. Beautiful temples and ashram are made on both Mausoleums. The temples are open for darshan 24 hours a day. Dada Darbar  is situated at Khandwa which is about 70 KM far. Both Road and Train routes are available to get there.

The Ghats on river narmada at omkareshwar are very beautiful and pleasant the flow of river is always remains constant here and water is clean, depth of water on the ghats are moderate so it’s always safe for pilgrims to take a holy dip on any of the ghats, Railings and chains are installed on ghats for safety of pilgrims and to prevent them from going into deep waters. Safety boats are also arranged for extra safety. Kotitirth ghat that’s situated exactly under the main temple and comes in front of the main shrine is most significant amongst all ghats. It is believed that by taking an immersion on this ghat one could gain “Punya” of a billion pilgrimages 9 km from Omkareshwar, this is a particularly picturesque scenic spot, with a panoramic view of the broad acres and gently undulating landscape that stretches in unbroken harmony till the horizon. Siddahvar Koot is a sacred pilgrimage of Jainism situated on the confluence of  river Narmada and Kaveri near Omkareshwar. This is considered amongst most holy  places under Jain religion. This is believed that many Mythological characters  took Salvation here. Jain temples known as Jinalayas exist here, they are 10 in  number and some of them are very old, constructed nearly about 1488 AD. From 13th to 15th the date of brighter fortnight of Phagun an annual congregation is organized here. Devotees can go there by road or by boats from Omkareshwar. Mandu also known as Mandav Gadh it is a very beauti full tourist spot in Dhar district of Madhya Pradesh.its about 160 KM from Indore and 90 KM from  Indore.Mandu is situated on the hieght of 2000 ft&nbsp; in the Vindhya  mountains.Basically it was capital of Parmar Kings of Malwa then in 13th century  The Sulans of Malwa renamed it as &quot;Shadiabad&quot; means The city of happyness. Shahi  hammam, Jahaj Mahal, Hindola Mahal, are main attraction here. The architecture of buildings are exilent and beautiful works on domes are worth watching. Mandu  is connected by road from indore. The dam started functioning in the year 2007. Because of this dam a reservoir of many square kilometer is created, which is having beautiful Islands In between.